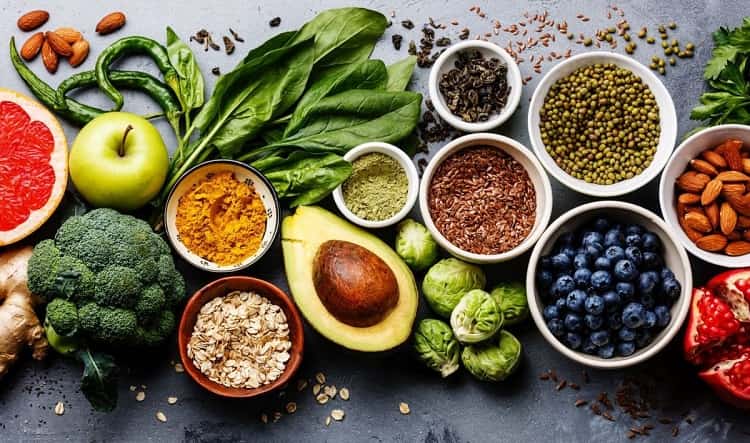 Once associated almost exclusively with granola-crunching hippies, the vegan diet isn’t nearly as fringe as it was, say, 30 years ago (Beyonce’s dabbled in it, for crying out loud, while Brad Pitt and Ellen Degeneres have been vegan for years!). Still, it can continue to draw some blank stares or skeptical eyebrow-raises from those who aren’t entirely familiar with what it actually means. Some people think “vegan” is an abbreviated way to say “vegetarian.” Then there are others who are convinced that being vegan means eating salads three meals a day. Let’s start clearing some things up.

What Does Being Vegan Mean?

A vegan diet focuses on plant-based foods and beverages and eliminates all animal products. Its anchoring aim is to eliminate the use and harm of living beings. While vegetarians still consume dairy and eggs, vegans remove any and all animal byproducts, or foods that involve animals in their processing mechanisms. Meat, poultry, fish, and dairy are taken off the plate and replaced with veggies, fruits, beans, nuts, and grains.

We’re focusing on the eating aspect of going vegan here, but veganism is thought of as an entire lifestyle. Many people apply its principles beyond food, steering clear of clothes, makeup, personal care items, medication, and even entertainment options that exploit animals or use animal products.

Oh, we should also note that a vegan diet is not automatically a low-carb or low-fat diet. It’s about cutting the meat here, not the macros.

What You Can Eat 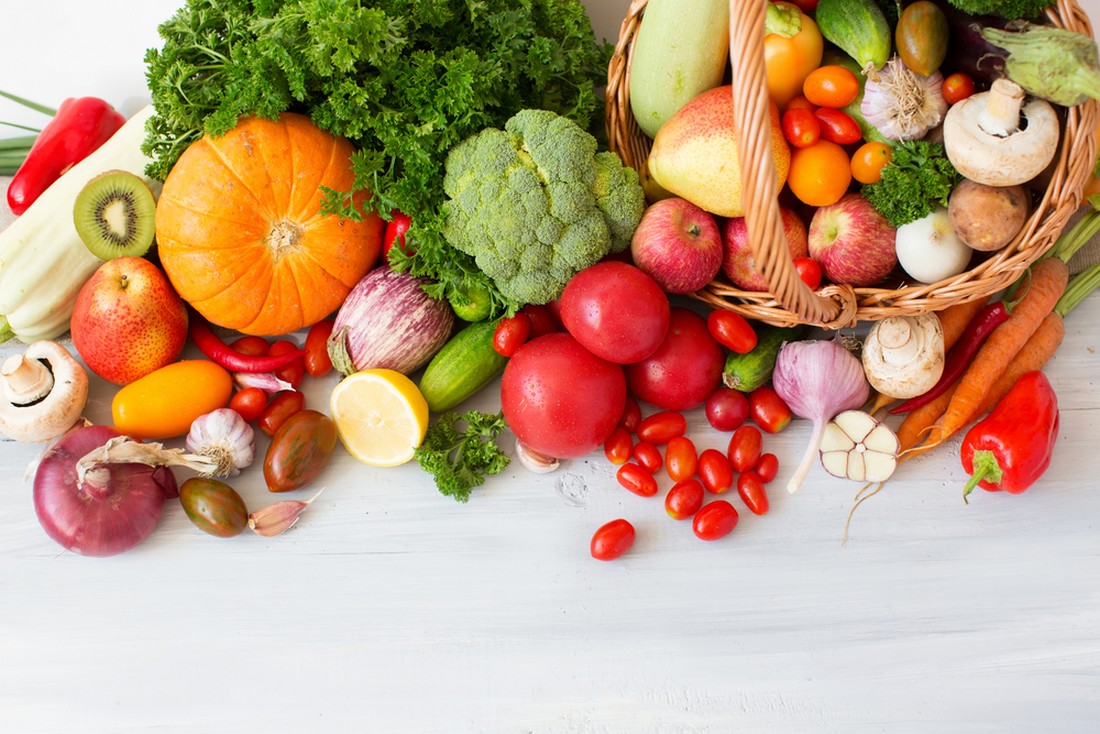 • Veggies. In case the “veg” part of “vegan” didn’t make that clear.
• Fruits. No limits on nature’s candy.
• Grains. Experiment with varieties beyond plain old bread, pasta, and rice. Think couscous and farro and barley.
• Legumes: Meet your new primary protein sources.
• Nuts and seeds: So. Much. Almond. Butter.
• Tofu and tempeh: There’s a whole world of non-boring tofu recipes out there.
• Plant-based oils: Cold-pressed is best.
• Natural sweeteners: Honey isn’t allowed (y’know, bees), but sweeten up life (in moderation) with coconut sugar, maple syrup, agave…
Pro tip: For some help in terms of vitamin intake, mineral absorption, or gut health, add fermented foods like seaweed, kimchi, sauerkraut, and miso paste, plus a source of vitamin B12 like nutritional yeast.

• Animal proteins: Beef, pork, poultry, and seafood are all off the table.
• Eggs: Scrambled tofu is just as good, don’t worry.
• Dairy: Cashew “mac and cheese” and almond milk lattes await.
• Bee products: Sorry, honey.
• Animal oils/fats: Careful, lard and fish oils can sneak into the most unexpected places.
Pro tip: Replace these foods with well-balanced vegan alternatives (read: plenty of legumes, quinoa, nut butters, and tofu) and trust us, you will still get plenty of protein.

Sneaky, Potentially Non-Vegan Foods to Look Out For
Certain breads: That glossy top comes from egg wash, while doughs can sneak in honey, egg yolks, or even protein from poultry feathers.
Condiments, dressings, sauces: Anchovies in Worcestershire sauce, eggs in mayo, dairy in ranch dressing, cheese in store-bought pesto.
Sugars: The process to make refined white sugar involves animal bone char—definitely not vegan.
Deep-fried foods: Your onion rings could be dredged in an eggy batter or fried in animal fat.
Gummy candies, Jell-O, marshmallows: These sticky sweets most often get their chewy, jiggly texture from gelatin.
Food/drinks with red coloring: That bright red “natural” color comes from the extract of crushed and boiled beetles. Can’t make this stuff up.
Roasted salted peanuts: Gelatin (protein from the tendons of cows or pigs) is used to help the salt stick to the peanuts.
Certain alcohols: Clear hard liquors = generally safe. Imported beers and wines that might be made with a fish gelatin = not-so-happy hour.
Juices: Omega-3, vitamin D-fortified OJ might get those “heart-healthy” boost through ingredients like fish oil and sheep’s wool-derived lanolin.

Check packaged food labels for words like castoreum, casein, lactose, rennet, shellac, and whey. They all refer to proteins, thickeners, and other additives sourced from animals. Read the fine print too—that’s where non-vegan allergens like milk or eggs are mentioned.

Whether you’re on the road or just eating out, planning in advance can be the difference between being happy or hangry. Pack vegan-friendly, portable snacks and don’t be shy about calling restaurants in advance about vegan options (they won’t think you’re weird).

Instead of jumping off the deep end into the totally uncharted territory of hemp/pea protein/cashew milk/kale smoothies, make the transition easier by finding vegan ways to recreate your favorite dishes. Satisfy an egg craving with scrambled tofu, make mac and cheese with cashew sauce instead of dairy, try bean-based burgers instead of beef patties. You can even make vegan bacon. And while the focus should be on real foods, eating a processed vegan hot dog once in a while isn’t gonna kill ya.

Being vegan has lots of health benefits, but cutting out animal products can also leave a few nutritional gaps in your diet. Prevent deficiencies in iron, vitamin D and B12, omega-3, iodine, and zinc by taking supplements or being diligent about eating vegan foods rich in those nutrients, like seaweed, nutritional yeast, lentils, and walnuts.

5. Focus on adding, not subtracting.

Nobody loves being told what they can’t have. Animal products may no longer be “allowed,” but if your grocery cart is packed with sweet potatoes, quinoa, spinach, bananas, berries, tofu, beans, and almond milk, it’ll be pretty hard to feel deprived.

Veganism is all about being kind to animals and the planet, but what’s the point if you aren’t kind to yourself too?! Give yourself a break if you slip up from time to time, be patient if your taste buds take a while to adjust to new foods, and don’t stress if you find that you can’t be 100 percent committed to being 100 percent vegan, 100 per0cent of the time.

No lifestyle change is easy to make alone. Join online or in-person vegan communities via social media, meetups, or forums. It’s so much more fun—and helpful—when you have fellow herbivores to help you stay motivated, swap recipes, answer questions, and generally feel less like the only vegan in the world.

Why Go Vegan?
Because if Beyonce’s tried it, we all should? Just kidding. There’s lots of anecdotal and scientific evidence on the life-changing benefits of vegan diets, and it goes much further than just lower numbers on the scale. From reducing your carbon footprint to potentially increasing your good karma, there are plenty of reasons people go vegan.

Assuming that you aren’t eating Oreos all day every day (they ARE vegan) or relying solely on processed foods, research shows that a varied, healthy vegan diet can play a significant role in improving overall health. Here are just a few of the effects of eating real, whole foods over time:

Aside from the nutritional benefits, many find a sense of gratification on a moral level by going vegan. There’s a compassion element to going vegan, the argument being that eating meat-free not only spares animals (however ethically raised) from slaughter or suffering, but also the human workers forced to work in less-than-ideal slaughterhouse conditions.

Want to do something good for the planet? Ditching the meat could help. Plant-based diets like veganism have shown to contribute the least to the greenhouse gas emissions, water wastage, deforestation, and climate change, all of which are side effects of large-scale meat production.

But How Vegan Is Vegan Enough?

When everything from orange juice and sugar to beauty products potentially contains animal-derived ingredients, being vegan isn’t as straightforward as some may think. If you’re ditching meat, dairy, and eggs but taking regular prescription medication (tested on animals), does that make you less of a “real vegan”? If your favorite nondairy creamer contains trace amounts of casein, have you failed at veganism?

The answer: It’s up to you.

Some vegans are super particular about the nuts and bolts, while others are more chill about the beer they’re drinking and aren’t fussed about what kind of bread they’re served when they’re out to brunch. While Judgy McJudgersons might say what they will, you get to decide where you fall on the spectrum, depending on what works for you, your body, and your lifestyle.

Is Veganism for You?

If you’ve been killing your workouts, sleeping like a baby, generally feeling awesome, and passed your last physical with flying colors, you probably want to stick with your current diet, vegan or not. On the flip side, if you have severe nutritional deficiencies (think iron, vitamin B-12, etc.), switching to a diet that makes it even more challenging to get in those nutrients may not be the best idea.

That being said, if you’re sick of feeling sluggish, your cholesterol counts are kinda concerning, or you’re simply curious about what an entirely plant-based diet can do for you, consider giving veganism a shot. You might love everything about it. You may realize that you feel better without dairy, but you’re also much happier drinking that non-vegan Guinness once in a while. You’ll likely discover that veggies are anything but boring. You just never know until you try.

No. Gluten refers to the protein mostly found in wheat, rye, and barley. It isn’t an animal product, so it qualifies as vegan.

2. Is veganism healthy for you?

If you’re eating a well-balanced diet including a variety of grains, fruits, vegetables, and plant-based proteins, veganism can be extremely beneficial for your overall health. If you’re eating 90 percent refined carbs, making meals out of processed foods, or neglecting supplements, you may be vegan, but you’ll also be far from healthy.

No. Cow, goat, and sheep’s dairy are all animal-derived, and therefore off-limits on a vegan diet.

Nope. Fish were once alive. Anything that was once alive = a no-no for vegans.

5. Is being a vegan good for weight loss?

Many people do find that cutting out animal products translates to lower numbers on the scale, but adopting a vegan diet doesn’t automatically put you on the road to weight loss. It all depends on how and what you’re eating. Plant-based foods tend to be less energy-dense than meat and dairy, but there are plenty of high-calorie vegan foods out there (oh, hello, Duncan Hines frosting) that not only contribute to weight gain, but also skimp on nutrients.

6. Is being a vegan expensive?

Not if you’re mostly eating real foods. Legumes, produce, and grains are some of the most affordable items at the store. If you’re piling your grocery cart high with frozen dinners or specialty foods like mock meats and vegan cheeses, though, your wallet might feel the pinch.

7. How do vegans get protein?

So many ways! Beans, nuts, tofu, tempeh, and quinoa are all fantastic sources of protein. And don’t forget, nearly all veggies and grains contain some amount of protein too. If you’re eating whole foods, pounding those protein shakes is really not that necessary.

8. What are the side effects of becoming a vegan?

At the same time, though, it’s not all rosy if you aren’t careful. Adverse side effects can include deficiencies in nutrients like iron, zinc, and vitamin B12, sudden hunger pangs and intense cravings, fatigue, and digestive issues. Many of these go away over time, particularly if you’re eating a well-balanced vegan diet and getting enough calories, but it’s important to monitor your symptoms and see a doctor if some don’t seem to go away.

9. What foods can you eat if you’re vegan?

Where to start?! Veggies galore! Fruit for days! Any grain you like! Your pick of beans, nuts, and seeds! Check out the much more comprehensive list above.

10. What’s the difference between a vegan and a vegetarian?

While vegetarians still consume dairy and eggs, vegans remove any and all animal byproducts. They also tend to avoid foods that involve animals in their processing mechanisms.

11. How do you transition to being a vegan?

Gradually, patiently, and smartly. Check out all our tips above for making the switch as smooth as possible.